Boys Soccer: Radnor adapts on the fly to get past Penncrest

RADNOR >> Ben Verbofsky’s position on the soccer pitch is very much a day-to-day query, as even the Radnor junior is willing to concede. So with Penncrest pushing forward in the first 20 minutes of Thursday’s Central League encounter and creating dangerous moments through the center of the pitch, a little tactical massaging by Radnor coach Joe Caruolo didn’t put Verbofsky off too much. The junior dropped back slightly in the formation, shuffling from an attacking midfield role to a deeper-lying spot, able to provide poise on the ball and neutralize the Lions’ up-the-middle strength.

By the time he made way 40 minutes later, the Raiders were well on their way to a 4-0 win. Verbofsky had a direct role in the second goal, a beauty that Ryan Peter tapped home. His ability to shift the balance of play in the heart of midfield settled the game down and permitted Radnor long stretches of dominance on the ball.

“I knew we were getting a little bit outworked in the middle,” Verbofsky said. “I went back in there and tried to work my hardest and change the game a little bit.” The question of Verbofsky’s natural position even has him a little stumped. As a sophomore, he excelled last fall as an outside back on Radnor’s District 1 Class 3A championship team. This year, his creative instinct and technical skill makes him a likely choice for the No. 10 spot operating off Peter’s shoulder.

But when the moment called for it Thursday, he was happy to adjust. Penncrest exerted control over the game via the central midfield pairing of Alex Boudazin and Max Brown. The duo dictated tempo in the first 20 minutes and threatened to find space in behind the defense — either with diagonal balls aimed at imposing center forward Matt Arbogast or by feeding the space on the wings. The final pass, though, remained elusive. And rather than risk the Lions dialing in their passing sights, Caruolo moved Verbofsky into the center to provide a calming presence. 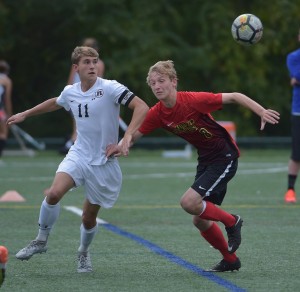