Girls Lacrosse: Games, Radnor defense too much for Garnet Valley

WEST GOSHEN — Emily Games had just scored four goals to help No. 2 Radnor advance to the semifinal round of the District One girls lacrosse tournament. The junior is one of the top attack players on the squad, and her performance Saturday at West Chester East High School was exactly what the Raiders were looking for.

At the end of the day, however, the onus was on the Radnor defensive unit, which was excellent in a 12-9 quarterfinal-round triumph over No. 7 Garnet Valley. The defense, consisting of Katy Junior, Nicole Massimino, Lindsay Frumer, Lindsey McShea, Morgan Gryga, Allison Lanzone and Kerry Hamill, forced Garnet Valley to hurt itself. The Jaguars (12-9) committed 14 turnovers, seven in each half.

“We made turnovers, too, so we definitely had to capitalize on their mistakes,’ Games said. “I think we did pretty well on the defensive side, trying to get the ball and force them to turn it over. It worked.’ 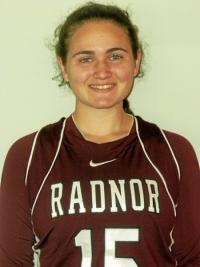 to read the article.