LOWER GWYNEDD — It was the biggest moment of her high school career.

Radnor’s Myonie Williamson stood at the foul line with 10 seconds to play in regulation. All she needed was to bank one shot to give the Raiders the lead and, perhaps, lift them to the District One Class AAA championship game Saturday at Villanova.

One would think that Williamson dreamt of being in such a situation at some point in her life.

But it was the good kind of nervous.

“I just wanted to block everything out,” she said.

Williamson made one free throw to put No. 8 Radnor ahead of fifth-seeded Merion Mercy. The lead would hold and Radnor went on to claim a 43-40 victory.

While Williamson missed the second freebie, Merion Mercy’s Tina DiGiacomo was unable to corral the rebound. The ball tipped off her hands and eventually out of play.

How fitting is that?

“It was really nerve-wracking,” Massimino said, “but my team really helped me get through it.”

Merion Mercy’s Velez Jackson, whom Williamson admitted to knowing well and respecting, did all she could for the Golden Bears (14-12). The guard feverishly dribbled upcourt with seven seconds to play and had a clean look from 3-point range. Her shot, though, rattled around the rim. Jackson came close to tying the game and forcing overtime.

Alas, it was not to be for the Golden Bears, who were going for their second consecutive trip to the District One final. Instead, Radnor celebrated a trip to the title game while also punching its ticket to the state tournament. Both are firsts in girls basketball at the high school.

“It’s really exciting,” forward Kristin Hamill said. “I’ve been in the playoffs in CYO (St. Katherine’s of Siena) but for my high school, there’s nothing more exciting to play for a championship.”

Hamill came off the bench early in the first quarter and made a huge impact along with fellow Raider reserve player Caitlin Connor. Connor had one steal and three assists in the opening half, while Hamill finished the game with seven points and six rebounds. A few of those boards came on the offensive end in the fourth quarter to extend Radnor possessions.

“I used to start, so yeah, it’s been kind of different,” she said. “It’s really helped me as the season has gone on, coming off the bench. I feel that now I’m always more ready to come in the game and help.”

The Raiders (13-12) shared the win with their student section, which may have played a part in causing Merion Mercy to miss eight foul shots. Caroline Corzell, who nailed a handful of high-leverage free throws in the Golden Bears’ quarterfinal-round win over Chichester, missed two in the waning seconds. A pair of 1-for-2 efforts evened the score at 40-40 before Williamson made what proved to be the winning shot at the charity stripe.

Radnor’s small, but vocal student section tried everything in the Book Of Weird Human Noises … like fake sneezing and mimicking dog barks (and there might have been a yelping vocalization, too). The Raiders fans were the proverbial sixth man.

“They’re out of their minds,” Jordan said. “They all did their homework tonight, I’m sure. Probably not, actually.”

Jordan added that he hopes traffic from Radnor to Villanova isn’t too bad on Saturday. A bus trip longer than five minutes could be an issue.

“We’re in uncharted territory,” he said. “We started out in the baby pool and we’ve worked our way down to the 12-foot end.”

Radnor and Merion Mercy were neck-and-neck most of the way, save for a brief stretch in the second quarter when the Raiders used an 8-0 run to take their largest lead of the night (21-13). The Golden Bears quickly responded with five straight points to end the first half.

Williamson was hot early on. She was 5 of 6 from the floor for 11 points in the first quarter. The future Dickinson Red Devil registered 19 points.

In the second half, Radnor got a boost from Lauren Pacifico, the team’s top 3-point scorer along with Williamson. Pacifico hit a pair of shots from beyond the arc in the third quarter and scored all 10 of her points after halftime. Freshman forward Allison Lanzone (nine rebounds) and junior guard Katie Jordan (six rebounds, three assists, two steals) also were big contributors to Radnor’s win. The Raiders played a 1-3-1 defense and mixed in some man-to-man early, and did something Chichester couldn’t — box out with consistency and limit the Golden Bears’ second-chance points.

“They made 24 foul shots against Chichester. … I think we actually won the foul shooting toward the end there,” Jordan said. “Maybe it was divine intervention for us and we made one more play than they did.”

And it was enough to send the Raiders into the District One championship. 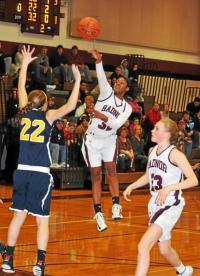